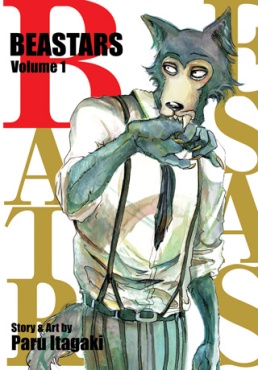 One night at Cherryton Academy, an herbivore student is brutally murdered. Among the members of the Drama Club, the herbivores’ suspicions naturally turn to their carnivore classmates… The prime suspect? Gray wolf Legoshi. But he wouldn’t hurt a fly. Or would he? Will dwarf rabbit Haru bring out the beast in him? Or are his feelings for her…something else?

*received an ARC from VIZ via Netgalley for an honest review*

I found this series to be quite original in that there aren’t many manga that focus on animal characters, or at least that are big in America yet. I know the furry community is excited for this and BNA to be on Netflix and have more of a following. I think this series stands out because it has both carnivores and herbivores in the same school and discusses what sort of incidents might be involved.

This manga starts out with the murder of an herbivore and everyone believes it to be one of the carnivore students, which causes much distrust. The mystery isn’t solved in the first volume, of course, but we start to learn about the main character Legoshi and how he is going through wanting to be kind and having beast instincts.

I am interested to find out who the murderer was and what will happen next with Haru. We are barely introduced to her before the end of the volume, although I know some things that happen next from watching the anime.

The only problem I had with the manga was that the art wasn’t something I enjoyed. I liked the art in the anime, but this art was a little too freeform, if that is the right word, and I can’t quite concentrate or understand what all is going on. That is my personal opinion, and I am not saying the art is bad. It just isn’t a style I enjoy and I know a lot of people do.

All in all, if you like mystery and animals, I say give it a shot! 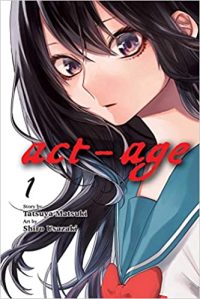 Kei Yonagi must delve deep into her psyche to succeed in the cutthroat world of acting, but can she keep her sanity while doing so?

Is there a method to Kei Yonagi’s madness when it comes to acting? The young actor has a family of siblings to feed, but she finds herself struggling with her psychological demons when playing a role. Her desperate acting catches the eye of a famous director, Sumiji Kuroyama, who’s looking for raw talent to mold. Can he help Yonagi navigate the cutthroat world of acting without losing her sanity?

*received an ARC from VIZ via Netgalley for an honest review*

I found this story to be quite interesting. It follows Kei as she wants to be an actress and support her brother and sister. She is obsessed with movies and associates things her life to feel the emotions. She is a method actress and becomes who she is supposed to be playing. The first manga is about how she gets selected by a director/agent.

The plot was interesting, and while the characters are quite unique, I couldn’t get into it. I think a lot of people may like it, and that is why I gave it 4 stars, but I don’t feel it is one I would continue. It just isn’t my style, and I didn’t care for the art. It isn’t a style I like and I felt there were quite a few mistakes for a published manga. As for the pacing, it is a little slow, but it picks up at the end. I definitely recommend for people who like stories about actors and actresses. 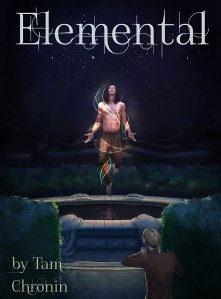 I was just a child.

A wizard came to my town. He came to find me. In a fiery blast I lost my home, my friends, my family. The entire town was obliterated.

I grew up a fugitive, surviving on the charity of others. As I hid, my powers grew. The nightmares grew as well. Something was welling up from within me. Something that could not be contained.

As an adult I took my place among the wizards. I ruled my country as a figurehead, a puppet of those with greater power or experience. I wasn’t to be trusted, or even talked to, for five long years.

The other wizards decided my fate. I was to be imprisoned, watched, guarded by the very wizard responsible for the death of my parents.

I had to lose everything, even my sense of self, before I found out who I was, and who my real enemies are.

Tam does a great job bringing her character to life. Agrad is given a lot of depth as he has his family taken away from him and he has to make it on his own. He felt really real in the way he had to cope with everything that had happened in his life, giving the story a more realistic aspect versus being pure fantasy.

Secondly, I found how the villain in this series very multidimensional as well. There is more this story, and we see throughout the book that maybe he isn’t really a villain but someone who had to live by his own circumstances. I really liked him a lot and wanted to learn more.

The world building in this book is great and I definitely recommend to anyone who loves dark fantasy!