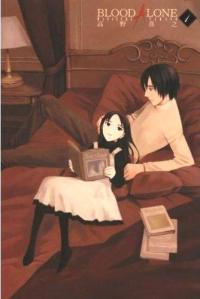 Well, here is my first review of a manga series! Normally I will only review a manga that is finished or review an arc of a storyline, but since this manga only comes out every once in a blue moon, I am going to go ahead and review it.

Blood Alone is an ongoing manga published in Japan about Kuroe Kurose, a private detective and author, and Misaki Minato, a young vampire girl, and follows different investigations that Kuroe receives. It can be very dark in some scenes, but in others be very cute and sweet. It is well rounded and a rather serious manga compared to others. Misaki loves Kuroe, but she is forever trapped in an adolescent’s body. Kuroe cares for Misaki a lot and has given up vampire hunting in order to protect her. The vampire inside of Misaki is slowly taking over and taking away her memories of being human. it is a slow change and Kuroe hopes to help keep her humanity in tact, or he might lose her for good. There are a couple of arcs that the series covers, in English at least, and all of them are quite enjoyable and suspenseful. All the characters are well rounded and I love Higure, an elder vampire who looks like a little boy. He is wise and dark but on the outside he just appears to be a boy. I find those to always be the scariest vampires, ones that look like an innocent child but are quite the contrary.

I really enjoyed the published books so far (1-6), but am very upset that 7-10 have not been released in the United States. I ordered 7 in Japanese, hoping the kanji would have kana next to it because then at least I can translate it, but unfortunately it doesn’t. So far I have translated a page. Either I need to be patient and wait for them to publish in English, or further my understanding of Japanese. I’m not quite sure which one will come first.

All in all, this series is worth buying, even though not all are available in the United States. I have read and reread the 6 books so far and hope that they decide to publish more in English. If you are looking for anything vampire, series, cute, yet suspenseful, this is a perfect series to pick up.

Hope you enjoyed my first review, let me know what other manga series you think I should check out!