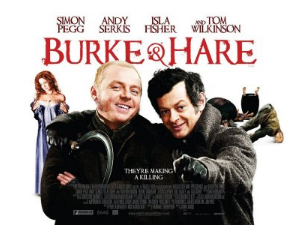 Based on the true story of the murderers Burke and Hare, this movie is an interesting comedy about how these two men (and Hare’s wife) killed people in order to make money by selling the bodies to the medical professors who needed bodies to teach students with. It started out innocent enough, as the first body had actually died by natural circumstances, but the two men got greedy and started killing others.

It is so weird that this is based on a true story. Seriously, how did they thing they would get away with it? Then again, it was the nineteenth century…

The movie itself was rather comical, and Simon Pegg and Andy Serkis did a great job playing the two murderers. There were also some other familiar faces, including Tim Curry and Isla Fisher. The scenery of Edinburgh was great and it made me miss the city.

I give this movie a 4/5, as it was pretty good and interesting, but could have been written a little clearer. I had a hard time understanding the doctors and what exactly they were doing. But if you like historic comedies, do check it out!