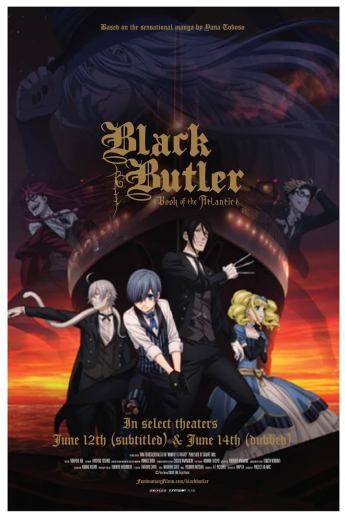 Title: Book of the Atlantic

Ciel Phantomhive and his demonic butler, Sebastian, are back—but their next case has them treading some rough waters! Aboard the luxury liner Campania, the two investigate an illegal human experiment that involves resurrecting the dead. But the closer they get to the truth, closer they are to their own deaths! Will this be their final case, or will one hell of a butler keep them afloat?

I got to see this in theater and ordered it ASAP when Funimation finally released it on DVD. In the manga, this is one of my favorite arcs as Elizabeth finally gets her debut of being a badass. I do love how the Black Butler franchise is making movies of Black Butler arcs and I hope they do the German arc and the School arc.

One of my other favorite parts of this movie is the Undertaker. I am behind in the manga (I should go catch up right now…) and want to know what plan the Undertaker has, if he even has a plan.

The art in this movie is as beautiful as always and the voice actors did a great job with their roles. Nothing seemed off putting to me, as I have seen in some other anime, and the movie seemed to follow the manga closely from what I remember. It is definitely a movie all Black Butler fans should watch, and if you haven’t watched Black Butler, then watch the first season through the Curry arc, then the Book of Circus, then Book of Murder, then this movie. Ignore the second half of the first season and season two… For your own sake.