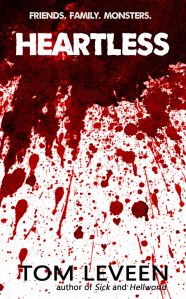 Urban legends of a murderous figure called Springheel Jack date back to the 19th century. What Baylee is about to learn is that “he” is most certainly for real…and not alone. When her only living relative—her older brother—becomes one of the bloodthirsty creatures, Baylee’s sole chance to turn him back rests with the only people inclined to believe her story: her brother’s nerdy RPG gamer friends.

This story had me hooked! I read it all in one sitting while I was getting over a cold, and just couldn’t put it down! I love myth and legend horror (especially vampire and the *occasional* werewolf) and have found Springheel Jack stories to be quite interesting (such as Stephen King’s short story). This story was suspenseful, entertaining, and scary just like any horror story should be.

All the characters were unique and interesting. My favorite was Timothy. I wanted to know more about him. Some of the story was left open in case there is a sequel, which I hope there is (won’t explain because of spoilers) but it came to a good close as well.

All in all, I highly recommend for anyone who likes horror and wants to be scared, especially if they live in the desert (damn it, Tom Leveen!).