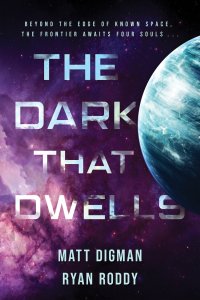 Title: The Dark That Dwells

An immersive new space opera featuring an unforgettable ensemble cast, set in a sci-fi world with a fantasy twist.

In this evocative science fiction series, four strangers are swept up in a gripping adventure of thrilling battles, ravenous creatures, and the return of forbidden magic.

As their paths interweave in love and hate, redemption and revenge, one threat will eclipse their greatest fears: a being of utter darkness and its imminent return.

This is a great, interesting space opera mixed with some magic! It had an ensemble of characters but it was easy to keep track due to the different voices each had, and the use of symbols for switching POV. Instead of *** they used a fox (yay!) and some other symbols so you had a mental note of who to think about. I thought it was really cleaver! I just wished Ban was the fox symbol (even though Fall had a reason he was a fox) for obvious anime “Seven Deadly Sins” reasons. 😛

But all in all, the world was really clever, the military aspect was well research and made sense, but wasn’t overly technical where you couldn’t understand what was going on. It had a nice mix of fantasy that was really cool to have in sci-fi. I thought it was really interesting and if you like Space Opera and Sci-fi military, I definitely recommend!