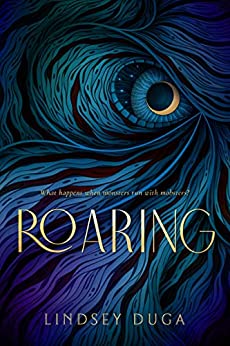 Colt Clemmons is an agent in a specialized division within the Bureau of Investigation—one that hunts down not just mobsters, but also monsters.

For reasons that are kept top secret, Colt is the only person who can resist a siren’s voice. But he’s never had a chance to test this ability. The last siren left in the world mysteriously disappeared years ago.

Then one night, with a single word, she reveals herself. It seems too good to be true.

And it is. Because nothing about this siren—her past, her powers, or her purpose—is what it seems…

I could not put this book down! This is a great historical fantasy that is set in the 1930s with flappers, speakeasies, and monsters! What more could you want? It felt like Fantastic Beasts and Where to Find Them mixed with Percy Jackson. There were a lot of twists and turns and I found it to be paced perfectly and had the right amount of information that kept me interested.

The main character, a siren, is on the radar of more than one agency. The government wants her, the people who have been hiding her don’t want anyone to know what she is, and her original creator wants her back. Little does she know that her gifts are actually supernatural powers that have been forced upon her at a young age.

That is, until Colt comes in. He throws her life for a loop as he wants to take her back to the US government headquarters. Never did he realize what other mysteries were surrounding her and the other monsters in the dark. A great spin on the genre that kept me wanting more. I hope there are more books in this series, as I want to know what else is in store for them.

I highly recommend for fans of the 1930s and fantasy!

Still with Madame Maldu’s gaze at my back, I slipped around the bar and headed for the young man sitting by himself, his fedora pulled low over his eyes. His sleeves had been rolled up to his elbows, showing off pale, but muscular, hands, wrists, and arms. It was a warm autumn for Boston, so his lack of coat wasn’t odd, but it stood out. In fact, he was the kind of fella who seemed like he could do whatever he wanted. If his goal was to blend in and not be seen, he could throw on his coat and sit with a drink and not talk to anyone, becoming one with the furniture. If he preferred to stand out, he could tip his hat back, and lift his face and smile, but if he wanted just the right kind of attention, all he needed to do was roll up his sleeves.

I shook my head. How could I have gotten all that from his exposed forearms?

Walking up to his table, I pulled out my waitressing tools and poised my pencil on my pad of paper, awaiting his order.

It was then that he looked up and I got a peak at the face below the hat.

His eyes were dark. It was the first thing I noticed. Eyes where you could barely tell if there were pupils at all.

It was clear he was attractive, but not in a pretty, hotsy-totsy sort of way. His face was geometric. Perfect, square jaw, a straight plane nose, triangular, high cheekbones, and a rectangle forehead. His light brown hair, practically blond, was swept to the side under his hat. But, like Madame Maldu, he was not handsome solely because of his looks, it was his air. His…competence.

A strange way to describe a stranger, perhaps, but it seemed to me that this was a fella who knew his place in life. His past. His present. Maybe even his future.

It wasn’t until he cleared his throat that I realized I was staring. Redirecting my gaze to the pad of paper, I waited for his order, heat creeping up my neck and into my cheeks, and a small shiver going down my spine.

Glancing up from my pad, I caught him staring as well.

Oh. He’s waiting for me. Now even my ears growing hot, I tapped my pad with my pencil, and gestured it toward him, showing him what I couldn’t say in words.

His brow furrowed, and for a worrisome moment, I wondered if he didn’t talk either.

After a few long, silent, and awkward seconds, he asked, “You want to take my order?”

His rectangular brow dented deeper, more into a right angle. “Do you not speak?”

I couldn’t help but admire the quality of his voice. It was a low timbre, a combination of the strings of a cello, the pluck of a bass, and the lingering bottom note of a sax.

The stranger’s brow now seemed to be a straight V, as if this angered or frustrated him somehow. An aura of hostility exuded from him.

Tentatively, I took a step back.

At my retreat, his face cleared and he gave me an easy smile, completely changing the lines of his face into something real handsome.

I’d been right. This man was a chameleon. He wore a rugged grin that would make most gals swoon. Maybe me included, if I hadn’t felt that anger coming off him like heat from a radiator in the dead of winter.

“Not a chatter, eh? That’s all right. I can talk enough for the two of us.” He leaned forward, folding his arms and resting his elbows on the table as his grin widened. I noticed his feet shift, hooking his ankles around the legs of the spindle chair. “If you don’t speak, I guess you can’t tell me your name,” the stranger said, his head cocking in a way that made him look contemplative. “Which is a pity. Lovely dame like you, I bet you’ve got a name to match. Do you mind if I take a few guesses?”

He wanted to guess my name? I merely stared at him. Not sure how to handle this one. Maybe I should back away and let Stanley take his order.

But I had to admit, the stranger intrigued me. It was a scary, thrilling sort of intrigue. Like hearing a scary story. Nerves heightened, bated breath, terrified and yet captivated, thrilled and yet wary.

He was the kind of thrilling a person would want to be brave for.

Lindsey Duga developed a deep love for courageous heroes, dastardly villains, and enchanting worlds from the cartoon shows, books, and graphic novels she read as a kid. Drawing inspiration from these fantastical works of fiction, she wrote her first novel in college while she was getting her bachelor’s in Mass Communication from Louisiana State University. By day, Lindsey is an account manager at a digital marketing agency based in Baton Rouge, Louisiana. By night, and the wee hours of the morning, she writes both middle grade and young adult. She has a weakness for magic, anything classical, all kinds of mythology, and falls in love with tragic heroes. Other than writing and cuddling with her morkie puppy, Delphi, Lindsey loves catching up on the latest superhero TV show, practicing yoga, and listening (and belting) to her favorite music artists and show tunes. KISS OF THE ROYAL is her YA debut novel.