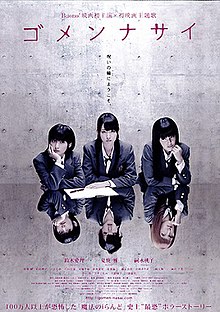 This Japanese movie follows a girl named Yuka who, along with other girls in class, starts to bully a strange girl in their class named Kurohane. Yuki didn’t feel bad since she was jealous of Kurohane’s writing skills and wanted to beat her in a contest for the drama. To find out, Kurohane didn’t write a screen play, but actually a novel that left the girl who stole and read it dead. More deaths happen after people read her notebook and Yuka figures out that Kurohane is behind it. Kurohane explains why she started killing people and why she is learning how to curse write. The rest of the movie deals with the curse and how Yuka must stop it

The story also goes into Kurohane’s past even more and tells what she wrote in her diary. I found it to be kind of strange that she told part of the story, then we hear the rest through the diary.

Plot-wise, I found this story be quite fascinating. A girl can write curses and whoever reads them will die. Based on an mobile story years before, I think that it was great that the pop group Buono! wanted to create it in a film because it spoke to them so much. It is one of those horror movies that makes you kind of nervous and glad you can’t read Japanese because you don’t want to be cursed too (though I wonder if Buono! made it into a movie as well so they didn’t get cursed). It was more about plot than it was about special effects.

This movie was rather creepy in the concept, but the sound and video lens were lacking. Although I really don’t care about special effects that much, the lighting, sound, and film angles did bother me as they didn’t make it feel like a horror movie. If they invested in it a little more, I think this could have been a lot scarier. The creepiest part was when Kurohane tells her story, as the lighting changed and was the only time they used it to their advantage (not sure if it was on purpose though). And they really needed to get rid of the high-pitch sound, it was really annoying.

The acting was okay. Some actresses could have been a little better at acting, but for the most part they were pretty good.

I give the movie a 3.5/5. The plot was good and creepy in concept, but the filming and sound could have been better to make it a lot more scary.

P.S., if you are a person who gets chain letters and is paranoid the chain letter will curse them if they don’t forward the letter, probably shouldn’t watch this movie…